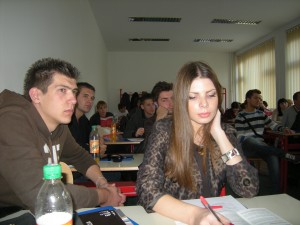 October 15, 2011 / Comments Off on A street action and training for youth on the topic of discrimination was held in Tuzla within the second phase of the project “Antidiscrimination”

The Association for Democratic Initiatives and the Youth Initiative for Human Rights, in cooperation with the Faculty of Law in Tuzla, and the youth organization “Revolt” organized a training for youth on the topic of discrimination.

The training was held on the premises of the Faculty of Law. The OSCE of Bosnia and Herzegovina is also a partner of this project, which is funded by the International Organization for the Protection of Human Rights Civil Rights Defenders.

The program started with an introductory presentation of the youth organization “Revolt”, which was held by Dajana Bakić, a member of the organization. The presentation was followed by a lecture held by Nina Šeremet on the topic: Introduction to Discrimination Issues: the principle of non-discrimination as a human right and as the most essential element of all human rights. After the lecture, a practical role-play exercise called “A Step Forward” was held, followed by a discussion of the lessons learned from the exercise and the basic needs of the people represented by the participants.

The topic encouraged students, as well as everyone else present, to think, so that the majority of students asked questions and argued their views on problems that they have personally encountered at the local and the level of the Federation of Bosnia and Herzegovina. The lecture raised many questions, including the issue of Roma, about which the participants had a constructive debate.

The conclusion drawn from the previously defined topic is that citizens should be held more accountable and that they are the ones who can prevent discrimination of any kind, that they should act on their own initiative against discrimination in cooperation with the non-governmental sector, authorities and various organizations, which operate throughout Bosnia and Herzegovina.

During the training, through constructive debates and discussions, it was evident that the participants effectively adopted the matter and understood the basic issues, as well as the ways of solving them.

The two-day training was completed with distribution of certificates and a street action during which the training participants informed the public about the anti-discrimination program by distributing promotional leaflets. 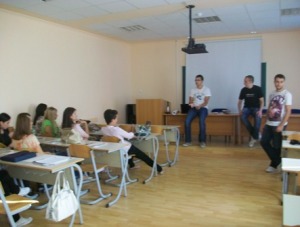 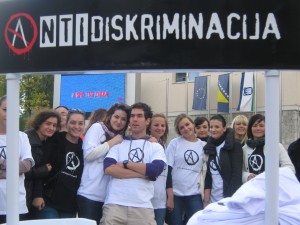